Several people have reached out to me lately wondering if non-monogamy is right for them. In order to help them figure that out, I’m going to do a series of posts on my general thoughts on the topic, starting with what it means to be non-monogamous.

When I started thinking through this, I figured I could summarize it in a sentence or two. For starters, we might define non-monogamy as the act of having sex with more than one person. What comes to mind are couples who swing with other couples or a single person who sleeps with multiple people outside a traditional relationship.

But if monogamy was only about sex, then it would be completely fine for monogamous couples to kiss or cuddle with someone else. For that matter, defining sex is extremely complicated.

What about being emotionally monogamous, but sexually open, or vice versa?

And then, there’s fetishes. I know people who feel an intense connection with another after cleaning their house. They might clean multiple people’s houses for this connection. Where does this fit in?

In other words, non-monogamy does not have to equate to having sex with more than one person. What if we define non-monogamy as having a romantic or sexual connection with multiple people? It still doesn’t encapsulate all the ways someone might practice non-monogamy, but it comes closer.

Why does this matter?

Because thinking through options helps us realize that there ARE options.

For most of my life, I didn’t realize there were options. I thought I needed to get married to feel okay about sex. I thought I should only find love with one person. I assumed it would be wrong if I felt or acted on feelings for multiple people. I assumed all of this because they were the only options presented to me as reasonable.

Think about connecting with others as a menu. A conventional menu gives us something like this:

But if we think outside of conventions, we can see this: 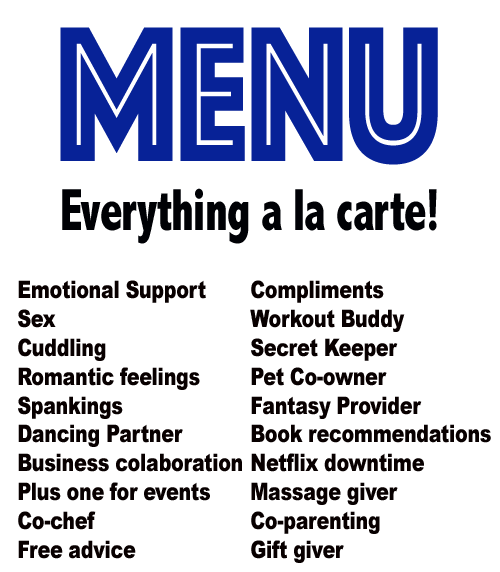 In theory, everyone you meet offers you a new menu, but it works much better if you both choose the same options.

Having choices is empowering and exhausting.

When you go to a restaurant, do you ever get overwhelmed by the menu? Me too. One of the reasons why value menus work so well is because they limit our options. Choose a number 1 through 20. You might not get exactly what you want, but you don’t have to put so much effort deciding. Sticking with conventions makes things easier. Sticking with conventions also might make you feel safer.

One of the benefits of a monogamous relationship (meaning one in which you do not act on sexual or romantic feelings for anyone else) is that you have more time and energy to put into each other, your other interests, and your platonic friendships. Non-monogamy in all its forms isn’t inherently better than monogamy. It’s not right for everyone, but it’s a choice we should all be free to make. Options outside of traditional monogamy can be ethical and enriching.

What might it mean for you to be non-monogamous? Do you want the freedom to cuddle with or kiss multiple people? Do you only want to have group sex with your partner? Do you want to consider yourself single but still free to pursue romantic feelings for others? There are so many options.

Ethical non-monogamy is making sure that what you choose matches up as best you can with what those you’re involved with choose. All relationship choices are valid as long as they are honest and include equal respect and concern for all parties involved.

Having options doesn’t have to mean there is no structure

Being non-monogamous doesn’t have to mean you’re free to sleep with whoever you want whenever you want, or say yes to everyone you have feels for.

For instance: at one point, I was living with David and had significant relationships with two other people, which was a lot to manage. But I was still on OKCupid flirting with other people. One of my partners called me out on it, and I realized that if I added someone else to this mix, I’d have to give up valuable alone time or time with one of my partners.

Couples have different rules: only sleeping with someone new after consulting each other, or reserving certain activities (like stroking someone’s hair or nicknames) for each other. Individuals should most definitely know their own boundaries: maybe someone tends to feel icky when they sleep with someone on the first date — so they should wait.

Advice I often give people new to non-monogamy is to respect their comfort zones, but push them. In other words: be kind to you yourself, protect your heart, but also challenge yourself. Look at what you’re afraid of and see if it’s still serving you.

Next up: what about polyamory?

Think I’ve missed something or disagree with any of this? Please comment!

One thought on “What does it actually mean to be non-monogamous?”