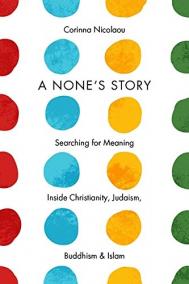 Individuals who don’t identify with a religious affiliation—the so-called “Nones”—are one of the fastest-growing demographics in the United States. Corinna Nicolaou, who grew up with non-religious parents and never attended religious services as a child, places herself in this category.

Then in 2001, the tragedy of 9/11 left Nicolaou wondering what solace these well founded traditions might have to offer. She didn’t actively pursue these questions until a few years later, when she moved to Washington state with her husband, exchanging a promising government job in DC for a quiet community in the Northwest and a restless search for purpose. There, she found herself “on a desperate search for the bits and pieces that might make [her] pot whole.”

She began with Christianity, attending church services from mainline to Jehovah’s Witnesses, studying communities while researching history. Then she revisited Judaism in Los Angeles, where she spent her teen years; Buddhism in Berkley where she went to college; then Islam in Dallas and DC. A None’s Story: Searching for Meaning Inside Christianity, Judaism, Buddhism and Islam, is the culmination of her four-year journey.

Nicolaou opens the book with a discussion on what it means to be a None, including the important distinction that not all Nones are atheists. In fact, not even the majority of Nones identify this way—a claim supported by the Pew Research Center. Nicolaou doesn’t directly express her own feelings about the existence of a higher power, but she tells us she “wished to know what the faithful knew . . . What, if anything, would I get from these experiences that I’m not getting by staying firmly planted in a secular world?” As a narrator, Nicolaou is humble, always open to new experiences and respectful of the diverse beliefs and communities she encounters.

As part of her search, she not only attended religious services, but also researched the history and major concepts of all four traditions, and reading how she grappled with esoteric theories and complicated stories reminded me just how inaccessible any given religion can be. In order to tell her own story, she has to give the reader four religious frameworks that she learned as went. I wondered as I read the sections about religious traditions I’m not as familiar with (everything but Christianity), if I were being presented ideas that many followers would disagree with.

But what made the book worthwhile to me was how the author found something that resonated with her in each tradition: the importance of joy, as well as the wonder and responsibility as an individual for simply existing. Even if her own understanding of how these concepts work in all four traditions is new and basic, it is still beautiful to see an individual’s values take shape through an intricate experiment of compare and contrast.

Nicolaou wonders, “So beautifully do these belief systems seem to complement one another that it’s difficult to imagine what anyone could find to fight about or why they might want to waste precious time and energy on an endeavor whose intent seems to be the opposite of perhaps the most important common denominator: gratitude.”

Related to gratitude, I see the author consistently return to joy: she finds joy in the teachings of Jesus, joy in Jewish festivities, Buddhist classes on joy, and in Islam, joy in the service of others. Where Nicolaou keeps coming back to gratitude and joy, another author might have focused on peace, social justice, or even fear; thus A None’s Story still testifies to the fact that one gets out of spiritual practices what one puts in.

The Nones, who now make up 23% of the American population, are becoming more secular according to Pew’s latest Religious Landscape Study. While over half of those polled still believe in God or a “universal spirit,” the number is decreasing. But the statistics don’t tell the whole story. Nicolaou is not alone as a None searching for spiritual anchors, inside or outside of the traditional places.

Other individuals like Krista Tippett, creator and host of the public radio program On Being, are documenting these searches. A Washington Post article aptly titled, “Some are writing obituaries for American religion. Krista Tippett is documenting its revolution,” excerpts part of Tippett’s interview with Post reporter Michelle Boorstein. Speaking of the Nones, Boorstein says, “There is a lot of spiritual curiosity in this group. … I hear about churches and synagogues that are full of Nones. There are a lot of Nones at seminaries. There is real theological engagement. Most importantly, a lot of ethical passion.”

Nones are reshaping the spiritual landscape of America, and their narratives mark the changing terrain. Some, like Gilbert’s Eat, Pray, Love or Krasny’s Spiritual Envy, show land beyond the boundaries of a particular tradition. Nicolaou’s book looks at well-trodden ground with fresh eyes, and if all groups are to peacefully share sacred space, focusing on what they have in common is a good place to start.