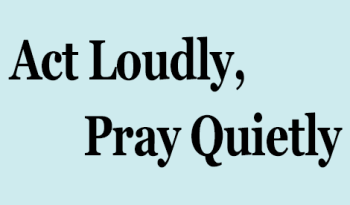 Following the mass shooting in the GLBTQ club in Orlando, the “Pray For Orlando” meme has overwhelmed my social media feeds. In a time of mourning for the queer community, the outcry of support is a welcomed change from the silence that followed the fire in the UpStairs Lounge in 1973. And while as a Christian I believe in the power of prayer and that all Christians should be praying about this situation, I don’t believe that publicly requesting or demanding prayer is the ideal Christian response in a crisis.

Even though the idea of prayer is larger than its Judeo-Christian representation, Christianity is still the dominant religion in this country making its version of prayer is the most common association. In other words, if a random person says, “I’ll pray for you,” most people would assume they were going to pray to a Christian God. And prayer memes such as “Pray for Orlando” force a part of the patriarchal religion in power into a situation of those that have been hurt and oppressed by it. All Christians need to be conscientious of the American church’s response to the gay community, such as the strong connection between the Religious Right and the rise in discriminatory bills limiting LGBT rights.

Last November, following the terrorist attacks in Paris, I was at a GLBTQ dance party in Chicago. It also happened to be the day after Trans Remembrance Day. The coordinators of the dance party stopped the music and asked for a time of silence for our lost trans family members. They mentioned the terrorist attacks and someone shouted out, “Pray for Paris.” The person with the microphone defensively shot back, “Pray for Africa, pray for Beirut.” I remember thinking how wrong it felt for prayer to be distributed discriminately. On the other hand, Jesus was the first to prioritize the marginalized. Jesus would be the first to not only pray, but act on behalf of those with the least power.

Prayer has a history of being seen politically, like in Mathew 6:5 where Jesus is quoted as saying “And whenever you pray, do not be like the hypocrites; for they love to stand and pray in the synagogues and at the street corners, so that they may be seen by others. Truly I tell you, they have received their reward.” He goes on to tell people to pray in secret. Was Jesus telling people to not pray with others? I don’t think so. According to scripture, he prayed with his disciples and while teaching in public. Instead, I think he means to not make one’s relationship with God a thing to boast about. Throughout his ministry, Jesus preached action and intentions. He asked others to not only clothe and feed the hungry, but also to treat everyone with inherent worth. He radically asked his followers to do everything out of love, not out of a sense of duty.

This is a time for Christians to pray humbly and quietly and offer support in other ways. How can religious communities better show our support to those in crisis? Churches can ban together to write senators in support of better gun laws, and we can donate money for the victims and their families. And since 29% of LGBT adults have at some time “been made to feel unwelcome at a place of worship” according to a 2013 PEW Research survey, this would be a great time to welcome queer members into our congregations unconditionally.