The Rev. Dr. Beverly Dale, affectionately known as “Rev Bev,” is an ordained Christian clergy in the Christian Church (Disciples of Christ) and graduate of Chicago Theological Seminary. She is currently an adjunct professor at Lancaster Theological Seminary teaching courses on sexuality and religion and is the founder of the inclusive, science-friendly, sex-positive Incarnation Institute for Sex & Faith.

Jera Brown: Why did you start IISF?

Rev. Dr. Beverly Dale: I started this nonprofit because it was obvious to me that the mainline churches were not going to do so — even though a positive Christian message about sexuality and our sexual, sensual bodies is desperately needed. We do very destructive things when we are cut off from our bodies’ treasure and when we limit pleasure. A rush to war, domestic violence, and aggressive relationships are all related to our comfort level to the body and to our lack of access to pleasure. 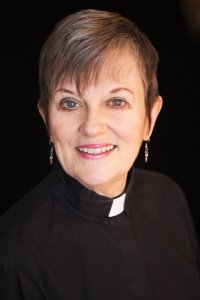 But, it is important that this body-positive message is decoupled from monogamy, the constructs of gender or gender identity, and sexual orientation. The truth is we know love through our bodies. Presumably, a very satisfied Creator pronounced them good upon creation (Gen 1). We know the sacred through our bodies as well. In fact, the very heart of the Christian story is God incarnate. That means that, as we look to the human, bodily form and life of Jesus, we see what God-in-the-flesh looks like. And that story has everything to do with living sensuously (Luke 12:27), abundantly (John 10:10, and compassionately (John 13:34-35) without regard to the societal limitations and the status hierarchy that places value only on some bodies.

Rather than teaching people there is something dangerous about pleasure and harmful about sexual expression, or expecting everyone to conform to the same gender binary and have heterosexual, procreative sex, a more moral approach is for the Church to teach how to make healthy sexual decisions, ones that reflect our faith in a God who expects us to treat others respectfully and lovingly.

One theologian, James B. Nelson said, “We know God through our bodies, or we don’t know God at all.” And, according to the Christian mystic, St. Julian of Norwich “God is in our sensuality.” That is not a message that has been heard loudly enough, hence the need for the Incarnation Institute for Sex & Faith.

JB: Tell me about the leadership training program.

BD: We are developing a certification process for professionals who are in the fields of sexology or theology. We have two levels of classes in addition to requirements for teaching and writing. We want these leaders to be both faith-affirming and sexually-informed.

Unfortunately, there are few sexuality graduate programs in our country, and none that I know of require a Sex & Religion course. So graduating sex therapists, counselors, and educators get out in the field and discover toxic beliefs that are crippling people and have no idea how to handle it. They need a way to approach Christianity that is sex-positive. In addition, the reality is that few pastors get any training in sexuality even though they are the first one called when couples are having relationship difficulties. Seminaries may teach about sexual boundary violations between pastor and congregants and maybe teach that women can be leaders and sexual minorities are not “abominations,” but they rarely go beyond that. (See the research done by The Religious Institute.)

However, we realize that lots of folks are interested in an inclusive, sex-positive Christianity beyond these professionals, so there are some ways for the general public to access this. I have a YouTube series called “Sex is Good” with 4-6 minute videos which focus on sexual topics. These are meant to be conversation starters. (See the first video in the series)

We also have a webinar series called, “Reading the Bible with Sex-positive Eyes.” The price is nominal. My sermons are online as well so folks can see what incorporating a sex-positive vision looks like within the wider context of congregational life. My YouTube channel is Revbeverlydale.

JB: What’s the question you’re most often asked about the relationship between Christianity and the body or sex?

Mostly people want reassurance that their gut is correct that the church is wrong. I tell them those awful church teachings come out of a Greco-Roman world view that did not value bodies — especially women, children or slaves — but valued reason above the flesh. Many church fathers (who were subsequently made into saints) were misogynistic and deeply sexually conflicted. People need to know that’s how the institutional church got sidetracked about the body.

I believe that deep in our hearts we know what is healthy and good for us. The church calls this the Holy Spirit who guides us toward the path we should take. This Voice knows when we are in loving relationships or when a relationship is not good for us, or whether we are violating our conscience. Many people listen to that Voice and make their sexual decisions based on its wisdom even if it violates traditional church teaching. My job then is to reassure them that where they find love, there they will find God. And of course, I also teach they didn’t get those restrictive ideas about sex and the body from the stories of the life and teachings of Jesus.

JB: What was your personal wake-up call that what the sex and body negativity we’d been taught were not God’s ideas?

BD: After I had messed up my life! My sexual history is a mess and I’ve documented that in a sexual/spiritual memoir, (a manuscript that is languishing for an agent at this point.) Sexual abuse led to an inability to establish sexual boundaries and incredibly low self-esteem that led to date rape, premature marriage, and being a teen mother. Combine this with my own sexual ignorance and anorgasmia (who knew what orgasm was?), I was a real mess!

My personal wake-up call was when I was going to college and being exposed to the Women’s Movement that said it was ok to be a woman and it was ok to follow my heart’s desire (or, in religious language, my call from God) to be a pastor.

When I was surrounded by a group of women who embraced their personal power, I was stunned. I felt flooded with grace and acceptance – from the secular Women’s Movement! Since I could feel and hear God’s love in that very premise, why had I never heard that from the pulpit? I was furious! It didn’t take me very long to realize that others had also failed to hear positive messages about their bodies and even heard worse messages. (I am thinking of the sexual minority communities here.)

I went to seminary knowing I was called to the ministry but not knowing if the church would honor it. But, while there, I discovered feminist scholarship and the liberation theologians critiquing the patriarchal institution and I knew I could stay to join them both, in the critique, but also in the proclamation of a very human Jesus whose loving message included justice and liberation. Our beautiful bodies need to be liberated from this sexually repressed bondage.

JB: What gives you hope?

BD: People are beginning to connect the dots: Those who condemn gays also think women should stay “in their place.” (And that place is not exploring what God wants for our lives.) And, it is becoming clearer that those who want gays and women on the bottom of the power hierarchy usually place little importance of the lives of immigrants, people of color, and the poor. The entire domination framework rests on the idea that some bodies are more worthwhile than others and this simply has to shift in order to prevent a genocide of our species. People are seeing that we can’t afford to continue to live in an “us versus them” mentality. I see the lightbulbs going off. “No one is free while others are oppressed” the saying goes.

For example, while the recent march on Washington DC was billed as the Women’s March, I saw lots of signs that people are seeing this is about more than women. We need to make a world where Black Lives Matter, where immigrant families are not destroyed, where everyone has health care. It is no longer about each group for itself because civil rights are human rights for everyone. Jesus’ gospel was to care for the “least of these” and he did not play favorites. He taught compassion and in so doing, transformed people’s lives. Our current political reality is making it all obvious and very stark. I see people realizing this in the new resistance movement.

But a piece of this movement has to shift people towards pleasure, living in the sensual now, appreciating all of creation for the miracle that it — and we — are. That is where my work comes in. It is a positive message of the body’s goodness – everybody’s body! Let’s care for each and every one among us and enjoy every single minute. For, when we live in love, each moment is sacred and has orgasmic possibilities!